Hanuman Jayanti will be Celebrated on 6 April in 2012

Yatra raghunatha kirtanam;
Tatra tatra kritha masthakanjalim;
Bhaspavaari paripurna lochanam;
Maarutim namata raakshasanthakam
Meaning : "We bow to Maruti, Sri Hanuman, who stands with his palms folded above his forehead, with a torrent of tears flowing down his eyes wherever the Names of Lord Rama are sung". 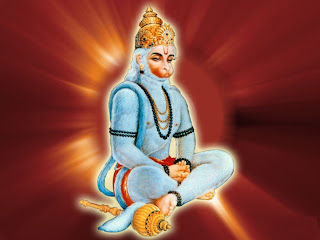 Sri Hanuman is worshipped all over India-either alone or together with Sri Rama. Every temple of Sri Rama has the murti or idol of Sri Hanuman. Hanuman is the Avatara of Lord Shiva. He was born of the Wind-God and Anjani Devi. His other names are Pavanasuta, Marutsuta, Pavankumar, Bajrangabali and Mahavira.
He is the living embodiment of Ram-Nam. He was an ideal selfless worker, a true Karma Yogi who worked desirelessly and dynamically. He was a great devotee and an exceptional Brahmachari or celibate. He served Sri Rama with pure love and devotion, without expecting any fruit in return. He lived to serve Sri Rama. He was humble, brave and wise. He possessed all the divine virtues. He did what others could not do-crossing the ocean simply by uttering Ram-Nam, burning the city of Lanka, and bringing the sanjeevini herb and restoring Lakshmana to life again. He brought Sri Rama and Lakshmana from the nether world after killing Ahiravana. 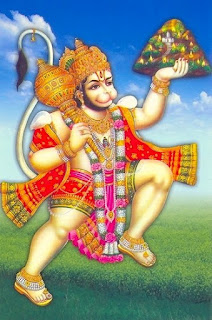 To mark the birth of Lord Hanuman, Hanuman Jayanti is celebrated all over India in the month of Chaitra in Hindu calendar. The great Hanuman is known for its great strength, power and his immortal devotion towards Lord Rama. He is considered to be a greatest follower of Lord Rama and played a crucial role in his life. He is also known as Sankat Mochan who people remember in both good and bad times. He is considered to be as one of the most powerful Hindu gods in India.
In Andhra, Hanuman Jayanthi is celebrated for 41-days which starts on Chaitra Purnima and ends on the tenth day during Krishna Paksha in Vaishakha month. In Andhra Pradesh devotees begin 41-days Deeksha on Chaitra Purnima and conclude it on Hanuman Jayanthi day.
It is believed that Hanuman was born at Sunrise. On Hanuman Jayanti day temples start spiritual discourses at dawn before Sunrise and stop it after Sunrise.
Hanuman, an ardent devotee of Lord Rama and Sita himself, is also known as Anjaneya.Hanuman Jayanti ki  bahot  bahot  Shubhkamnaye from Timeshare product Magic Holidays.
Posted by MagicHolidays.Info